‘Zinester Ghost: Sister Ghost’s Zine Workshop” –
Join the Sister Ghost gang for an afternoon of herstory, creativity and zine-making activism! Suitable for beginners to advanced zine-makers, this workshop will be fun & hands-on, touching on topics within intersectional feminism, women in music and activism. You’ll learn about zine culture and have the opportunity to create your own zine with the band.’
This workshop is for female & non binary participants.
Location: The Shack, 10 Astna St, P85 R580

Molly O’Mahony has spent much of the last decade writing and performing with art-folk group Mongoose. She returned to her home place of west Cork in March of 2020, and against the backdrop of the unfolding pandemic, began work on her first solo collection of songs.

During lockdown, she bounced many ideas off her two musician siblings Matilda and Fiachra and collaborated on arranging a number of covers with them. This period of time and these collaborations greatly informed her own songs, which were recorded over the summer of 2021, and which her siblings played a crucial role in arranging and playing on.

Molly released two of these songs over the latter half of last year, Remember To Be Brave and Brother Blue.

Her debut album is scheduled for October 2022

As CIGF 21 reached its conclusion, the bard of the Lee, John Spillane sent a rapt audience out of Spillers Lane into in the dusk with his songs still ringing around the streets. It was an event so enchanting that we are returning to Spillers Lane at the height of summer with acclaimed and eclectic collective Dog Tail Soup.

This is going to be one of the most memorable events of the year as we enjoy one of west Cork’s best musical projects in the historic and atmospheric courtyard at the centre of our town. 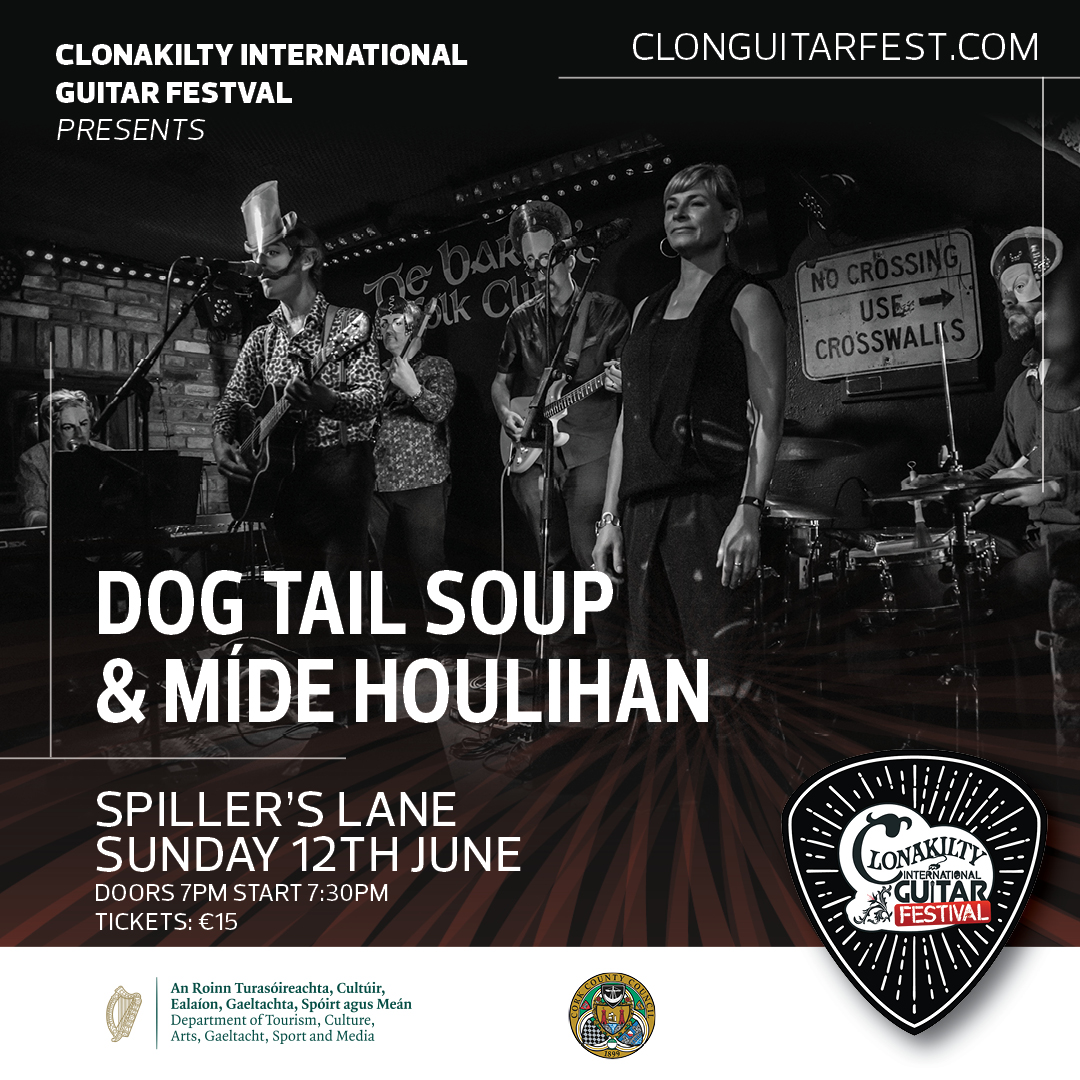 Marisa Anderson channels the history of the guitar and stretches the boundaries of tradition. Her deeply original work applies elements of minimalism, electronic music, drone and 20th century classical music to compositions based on blues, jazz, gospel and country music, re-imagining the landscape of American music.

The New Yorker calls Anderson ‘one of the most distinctive guitar players of her generation’, while NPR refers to her as among ‘this era’s most powerful players’ . Her work has been featured in Billboard, Rolling Stone, NPR, SPIN, Pitchfork, the BBC and The Wire. Festival appearances include Big Ears, Pitchfork Midwinter, Le Guess Who and the Copenhagen Jazz Festival.

Anderson’s discography includes five solo records and multiple collaborations. Her latest release, Lost Futures (2021), is a collaboration with guitarist William Tyler. In 2020 Anderson released The Quickening with drummer Jim White (Dirty Three, Xylouris White). Anderson is sought after as a collaborator and composer, contributing to recordings by Matmos, Tara Jane O’Neil, Beth Ditto, Sharon Van Etten and Circuit Des Yeux among others, as well as creating music for short films and soundtracks.

Classically trained, she honed her skills playing in country, jazz and circus bands. and currently tours extensively throughout Europe and North America.


Cherished and admired in equal measure by listeners and fellow musicians, award-winning guitarist, singer, songwriter and prolific collaborator Kris Drever has been a leading light on the UK roots scene for well over a decade.

A highly skilled guitarist who adroitly blends traditional folk and flat picking with more contemporary influences – allied to a distinctively relaxed and poised vocal burr – Drever is an astonishingly fine interpreter of others’ songs, with an increasingly frequent knack for concocting seriously smart lyrical observations and earworm melodies of his own.


George Lowden is a luthier based in Downpatrick, County Down, Northern Ireland. He constructs steel and nylon string acoustic guitars by hand without any UV finishing as well as solid-body electric guitars.

The Lowden Story:
In the late 1980’s George Lowden accepted an invitation to visit the main Lowden dealer for Switzerland, Servette Music in Geneva. Upon his arrival, co-proprietor Yves Imer thanked George for coming, because some of the Lowden customers he was to meet had not realised he actually existed – they thought “George Lowden” was merely the figment of some marketing man’s imagination – a leprechaun, in fact!

This served to enlighten George to the principle that an ‘information vacuum’ will always be filled – sometimes benignly, sometimes bizarrely.So, for the record, HERE is the complete story of George Lowden and his guitars.

THIS SHOW IS SOLD OUT

A critically acclaimed performer, as well as a member of King Kong Company, SON – aka Susan O’Neill –  is one of Ireland’s brightest emerging talents. The basis of her first album ‘Found Myself Lost’ saw SON find her voice amongst her peers, introducing her unique and otherworldly style.

The album was one of Hot Press magazine’s ‘Albums of the Year’ and garnered her a number of opportunities, including joining Sharon Shannon on her sold out tour of Australia and New Zealand.

The enigmatic singer-songwriter honed her musical skills as one of the youngest members of the Ennis Brass Band and gained her first gospel influences with the ‘Really Truly Joyful Gospel Choir.’ SON has recently been collaborating with multi-platinum, award winning artist, Mick Flannery, whom she recently released a duet, “Baby Talk,” to rave reviews. In promotion of the song,

SON and Flannery have made several late night talk-show appearances as well as having announced joint tour dates. Her solo career as SON has begun to pique critical and industry interest. Eclectically fusing traditional Irish folk with rock, soul, gospel and blues, her live performances are quite simply electrifying. Her husky vocals combined with her superb guitar technique, loop pedals and trumpet, have wowed audiences everywhere from Stradbally to Sydney, Glasgow to Glastonbury, Manhattan to Milwaukee, and many places beyond.

Xylouris White is firmly rooted in the past and future. Playing Cretan music of original and traditional composition, the band consists of Georgios Xylouris on Cretan laouto and vocals and Jim White on drum kit. Xylouris is known and loved by Cretans and Greeks at home and abroad and has been playing professionally from age 12.

Jim White is an Australian drummer known and loved throughout the world as the drummer of Dirty Three, Venom P Stinger and now Xylouris White.

For the last four years these two men have been performing as Xylouris White, the culmination of 25 years of friendship forged through music and place.

Andy Irvine is one of the great Irish singers, his voice one of a handful of truly great ones that gets to the very soul of Ireland. He has been hailed as “a tradition in himself”.

Musician, singer, songwriter, Andy has maintained his highly individual performing skills throughout his over 50-year career.

Andy has been at the helm of legendary bands like Sweeney’s Men in the mid 60s, to the enormous success of Planxty in the 70s, and then Patrick Street, Mozaik, LAPD and recently Usher’s Island. Andy has been a world music pioneer and an icon for traditional music and musicians.

As a soloist, Andy fills the role of the archetypal troubadour with a show and a travelling lifestyle that reflect his lifelong influence, Woody Guthrie. To quote the Irish Times, “Often copied, never equalled”, his repertoire consists of Irish traditional songs, dexterous Balkan dance tunes and a compelling canon of his own self-penned songs.