Our own guitar master Bill Shanley is back for this years festival:

He will be part of the Shanleys house band over the weekend & tells us he will be wandering around town with his gretch in tow only looking for sessions to jump into over the weekend – welcome to GUITARTOWN! thats how we Roll!

Being an accompanist has always been of key interest to Bill, enjoying the great scope and limitless backdrop you can create as a player for the artist you’re working with. This skill was commented on in the Financial Times review of a Ray Davies show a the Royal Albert Hall –“Is there a finer sideman around? It’s unlikely…”

Raised in the West Cork haven of Clonakilty in the renowned Shanley’s Music Bar, Bill was surrounded by pro musicians from a young age. Bill’s father, Moss Shanley, a great piano player and entertainer, himself immersed in the music of the 40’s and 50’s, encouraged Bill to sit in on gigs from an early age and was a great mentor to him in his formative years. 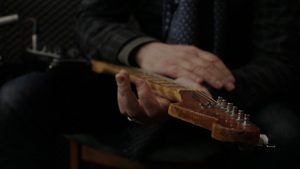 Noel Redding, of the Jimi Hendrix Experience, gave Bill his first guitar lessons and was a big part of Bill’s musical education introducing him early Rock and Roll and much more. From his first guitar lessons with Noel at the age of nine they played hundreds of gigs together in Shanley’s Bar, joined on regular occasions by Mitch Mitchell, Tom Mc Guinness and Eric Bell.

Noel and Bill’s playing partnership culminated in a concert, together with Randy California, in the famous Olympic Theatre in Paris in 1990 to mark the 20th anniversary of Hendrix’s death, the same venue that the JME did their first ever gig in 1966.

In 1990, straight out of school, Bill moved to Dublin and established himself as a highly sought after guitarist both in the studio and live. Accompanying Eleanor McEvoy during the heady days of recording “A Woman’s Heart”, on the strength of which Eleanor and her band signed to Geffen Records in 1993, and becoming a key member of Mary Black’s band in 1995,  remaining so today as musical director, and recording the Full Tide, Stories from the Steeples, Speaking with the Angels, Shine and more recently Mary Black sings Jimmy Mac albums.